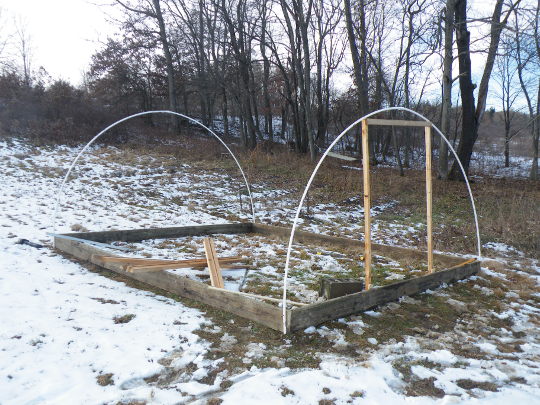 Base Frame and Ends

I’ve been meaning to take cool weather veggies more seriously for several years now. I’ve never had much luck with the likes of broccoli, cauliflower and cabbage, and thought there might be an issue with my timing. I was also interested in extending the growing season in the spring and fall, so I decided somewhere in the depths of the miserable winter of 2013-2014 to construct a hoop house. 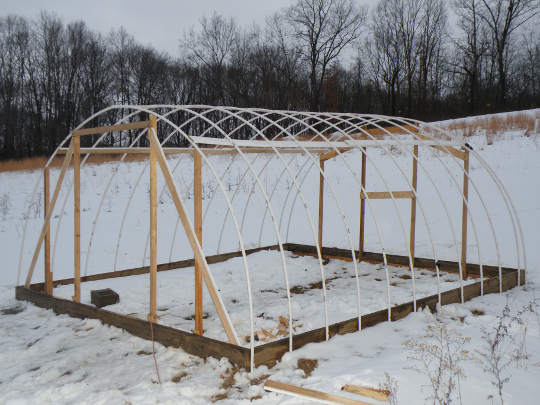 I found a blog post online which included plans for a 50 dollar hoop house: http://doorgarden.com/10/50-dollar-hoop-house-green-house  I didn’t follow their plans exactly, and modified it to suit my own purposes and the building materials I had on hand.

I made the base out of treated 2 x 10’s, nailing them together on the ends. If I could do this again, I would use screws or bolts to fasten the boards, and even add posts on the corners, to anchor the building. I used some old trim boards to create the end caps, leaving a door area open on the front end. 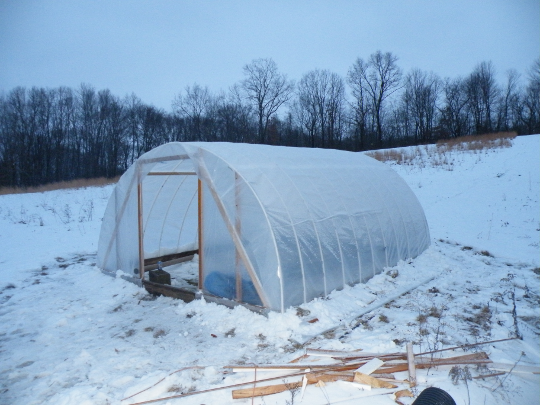 The plastic was quite a bit more expensive then I imagined, coming in at $80 + shipping, but it’s very thick plastic, and it’s what the “professionals” use. I managed to cover the ends with a much cheaper drop cloth type plastic used by painters. Since this end wont have to carry the weight of the snow, it should be just fine. 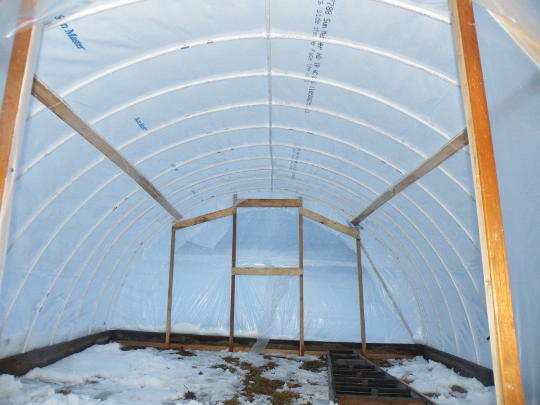 By the start of February, I had the hoop house covered, and ready to plant, with one exception: I had to wait for the soil to thaw. This winter was particularly cold, reaching as low as -15 when the wind chill was factored in. 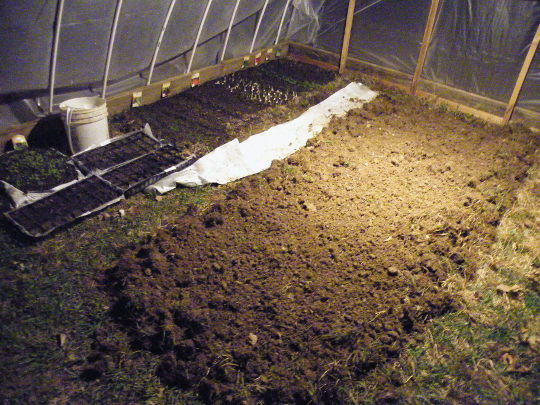 While I was waiting for the soil to thaw, I placed two bags of potting soil in the hoop house, and planted chard, spinach and lettuce. Rather then spread the soil on the ground, I simply cut the top off the bag, and poked some holes through the bags base. This would allow excess water to drain, but at the same time act as a weed barrier. 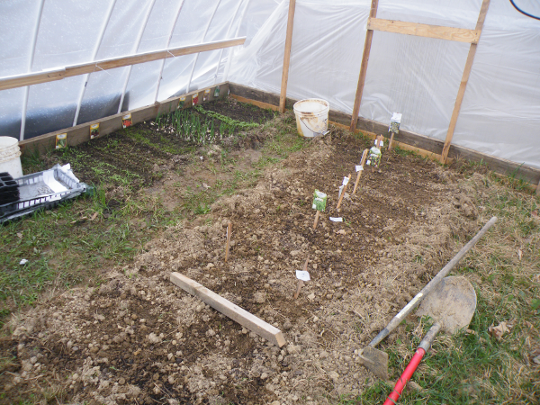 So what have I learned from all this work ? The middle of March seems to be a good time to plant spinach, lettuce, carrots, onions, and radishes. Swiss Chard didn’t seem to do well, but eventually did grow. I planted broccoli, cauliflower, pak choi, peas, endive and escarole a few weeks later, and all are doing great.

I’ve also learned a thing or two about hoop house construction. You see we had some extreme winds, and the building took a serious beating. I came home from work to find it all but flattened, and nearly blown away. To counter the winds, I will actually glue the pvc pipes together next time, and also sink end posts a few feet into the ground to resist wind damage.

The plastic worked very well, even in the high winds, but I also need to think about an automatic heat venting system for sunny days.

I’ve since transplanted all of the broccoli out into the much bigger garden, and plan to do so with the cauliflower as well.