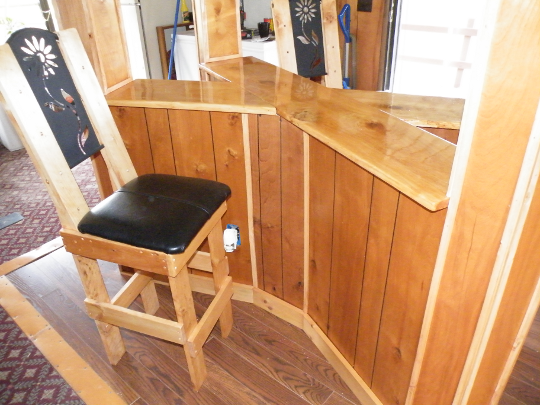 I’ve been working on an X shaped bar for several months now. The whole project was an evolution of ideas, starting with the desire for a more open space. I wanted to rip out the wall between my kitchen and my living room, and replace the structural support the wall provided with a central pillar. After kicking around some ideas about the best way to implement the idea, I settled on an X shape to hold the weight of the roof, with a hollowed out top portion that would become my new kitchen table. What a great way to save space by combining a wall and a table !

The project has taken quite a bit of motivation to complete, but now that I’ve finished all of the wiring, lighting, flooring, trim and bar stools, it’s time to move onto new projects. 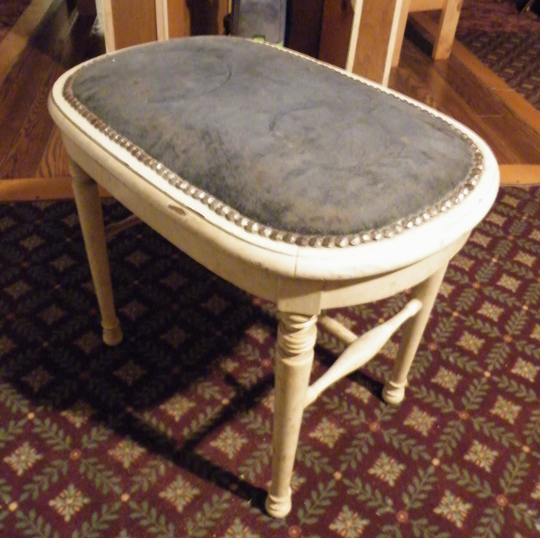 My family has had this white bench as far back into my memory as I can dig. It used to be a brilliant white, with a fresh looking blue cover, rounded out with small studs to hold the blue fabric in place. The white paint faded long ago, and with chipping it looked pretty worn out. The fabric too succumbed to the passing of time, and the bench found itself in storage, left to the first passerby who would give it a home. So one day I did just that and took it home.

It didn’t take long for the bench to become a sticking point in my concentration. Like so many other things, I became obsessed with how it could be improved. I decided that this bench would look so much crisper if the wood grain was exposed, so I began collecting the tools needed to refresh it. 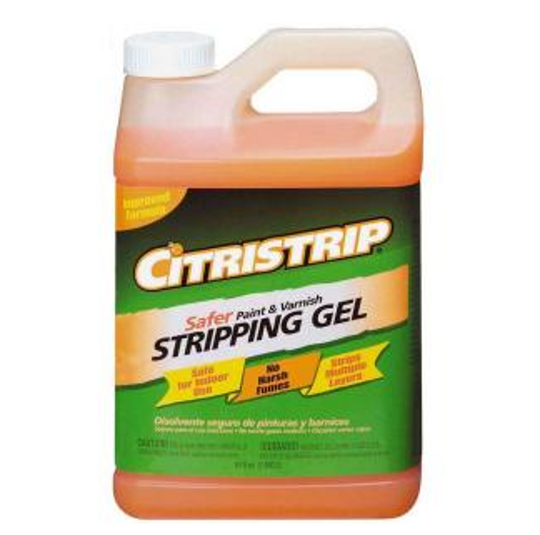 I purchased some Citristrip stripping gel. Gel works well for furniture that isn’t flat, and will stick to surfaces rather then running off as other stripping fluids would. I also purchased a plastic stripping tool, some medium grade steel wool, and a small bottle of Mineral Spirits. 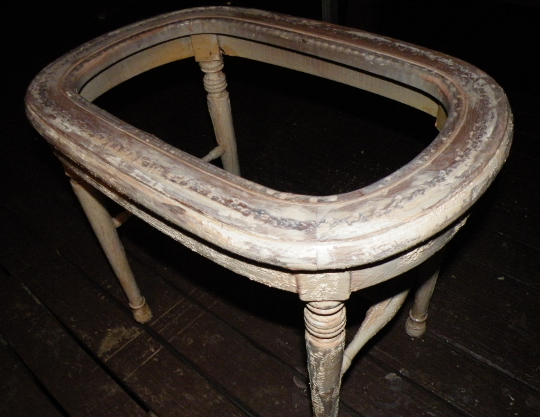 The first step is to move the piece to a well ventilated area, I choose my porch. Then apply the stripping gel with a paint brush and find something else to do for 30 minutes to 24 hours. I applied the gel at night after work, and stripped it the next night. The temperature was just above freezing at the time, making work uncomfortable, but not impossible. 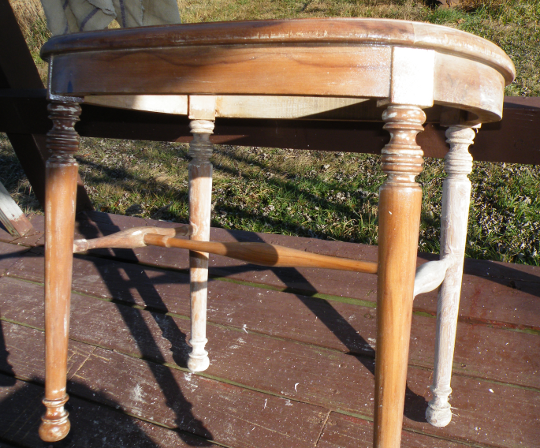 It took a few applications of the stripping gel to remove all of the paint. Once I saw the wood grain, I knew I was on the right path. To clean the finer detailed areas, I used the steel wool to remove the gel after it had sat for 24 hours. A tooth brush also works wonders, and I bet a piece of string would really work well, although I didn’t have any to try out. 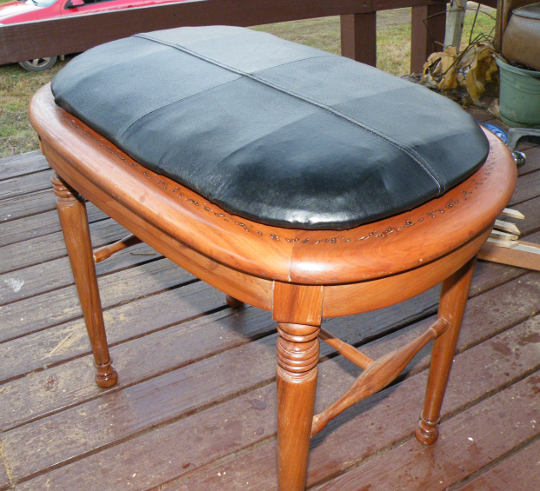 After stripping off all of the paint, I took all of the pieces apart and sanded them down to 200 grit sandpaper, with 800 grit for the areas that would get the most attention. A quick birch stain brought out the grain, and a new leather seat surface rounded out the project. 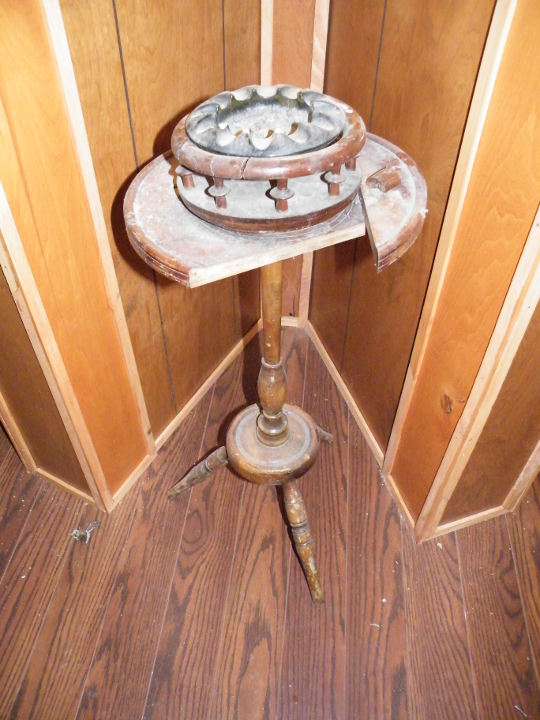 Once my sister saw what I did to the bench, she gave me this smoking stand that I helped my father restore about 20 years ago. When we were finished long ago it was quite a beauty, but it fell into disrepair once again.

I again used Citristrip to remove the previous stain and polyurethane, but some of the stain wouldn’t come out of the wood grain, so I tried something new, and showered the stand with water and bleach. The bleach helped even out the colors in the wood, and the hot water helped remove the glue holding the pieces together. 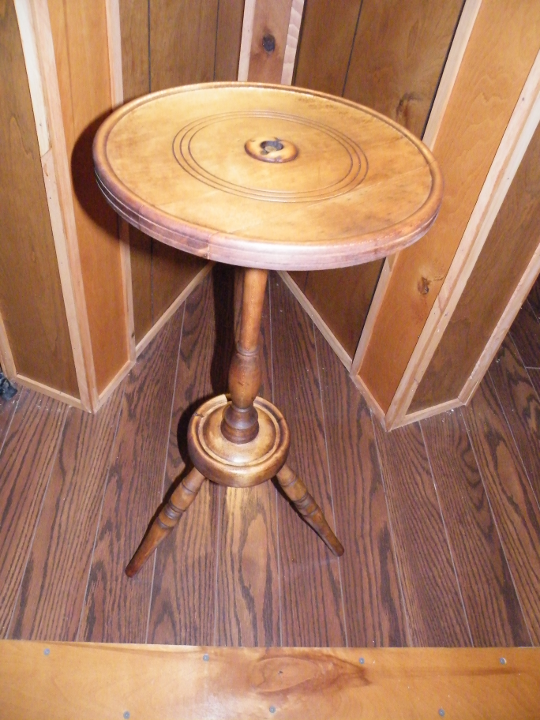 Unfortunately, the top ring under the ashtray had been damaged quite a bit, and It would need a newly fashioned ring to be created. I opted for a different approach. Since I quit smoking some years ago, I thought it pointless to have a smoking stand, so I left the ashtray portion off, and instead created a nice end table. Birch Stain worked well after the bleach was used, and the stand looks beautiful once again.

This entry was posted in Furniture, How To's, Tools and tagged Antiques, Citristrip Review, Restoring Furniture. Bookmark the permalink.