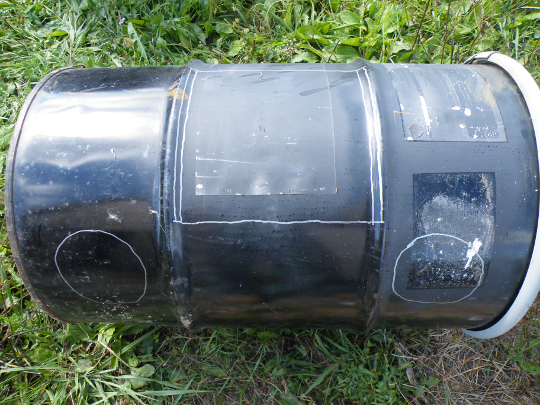 I’ve been investigating how sand blasters work in order to speed up my learning curve. You see, I haven’t saved enough yet to purchase the required equipment, and it may take some time to accomplish this task, so I thought I’d build my own.  I needed a basic metallic structure to contain the sand, and after looking around the farm the most suitable object I found was the metallic barrel in my greenhouse. I had been using two of them as thermal batteries, but I never believed they were large enough to stabilize the temperature, so I began working to upgrade them. 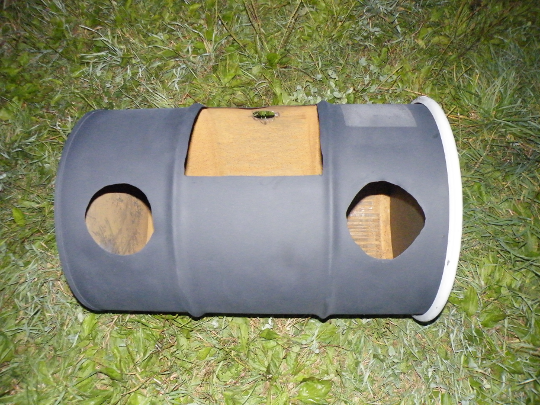 Cut Out and Painted

After some imagination and lots of starring at the barrel I decided to go ahead with my design, and cut out the basic shapes with a electric grinder. The square hole would be for my eyes to view the object being blasted, and the circular holes would allow my hands into the cabinet to do the work. 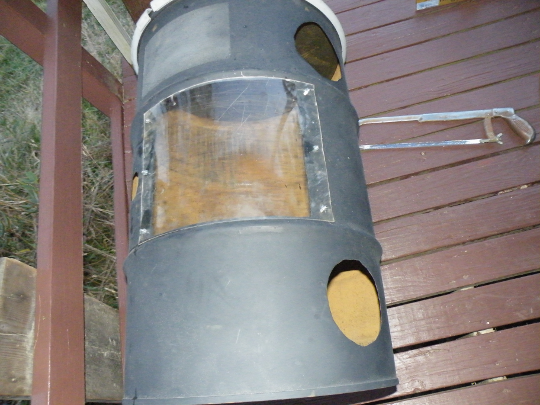 The next day my sister must have wondered what this crazy cut out object in my yard was and guessed what I was building because she brought me a piece of Plexiglas which was just large enough to cover the viewing square. I attached it with six bolts, and should have applied silicone before tightening them. 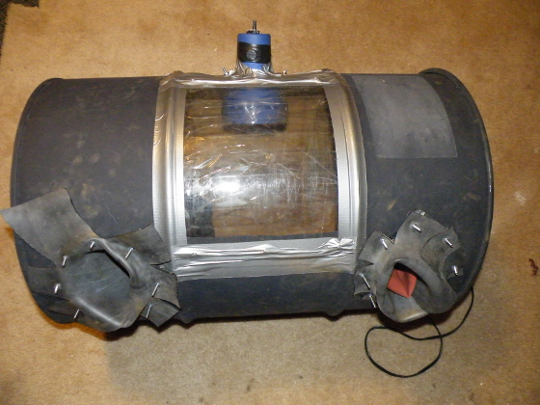 I then waited patiently for my blasting gloves and siphon style blaster before including them in the design several days later. I also inserted an old lamp light into the top to aid in viewing. The gloves were a bit short for my design, so I had to lengthen them with some old tire tubes taped to the gloves and secured to the barrel. 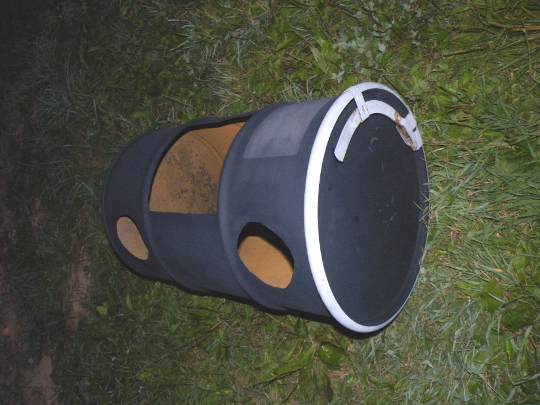 For the door into which objects could be loaded, I decided to use the original mechanics of the barrel. The gray lever shown expands the gray loop when pressed down, which allows the entire lid of the barrel to come off. I settled on this design to allow the largest possible pieces of glass to be loaded inside.

I’m not yet done with the project which still requires a few new components, but If I’m careful, I can etch glass with it, and I have begun to do so. I’ll post pictures soon, but keep in mind I’m still learning, and I’m not using the right materials or equipment. This whole project is part of a much larger mission. Someday I hope to build a blasting room, one that I can walk into to work. This project is a very small prototype of that ambition.

I’ve also picked the last of the peppers for the year, and all of the green tomatoes have turned red. I guess gardening will be on hold till next spring.