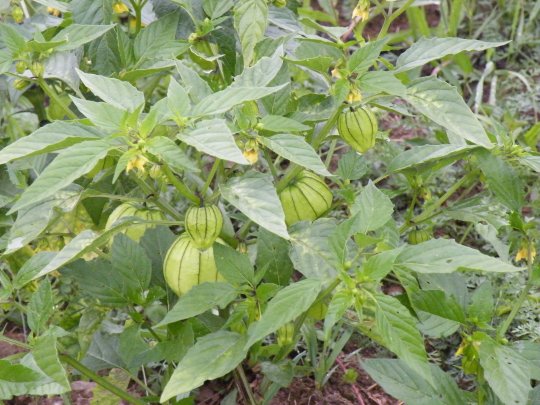 Tomatillos are an odd plant. First off, they are called “Mexican Husk Tomatoes”, although they aren’t tomatoes. The fruit itself it surronded with a papery husk, which splits when the fruit is ready to eat. It has been described as citrus like, although I personally don’t like the taste raw.

There is one very good reason to grow this plant: They are exceptionally blight resistant. I had hundreds of tomato plants affected by the late blight this year, and these Tomatillos seem completely unaffected.  I will grow them again next year, as some members of my family members enjoy the  peculiar flavor.

Here’s a recipe suggested by a friend. Sounds Yummy !

Cover and simmer for 4 hours.

Thicken with a slurry of 2-4 Tablespoons of flour in a small amount of water, bring to a boil.

This entry was posted in Recipes, Tomatoes & Peppers. Bookmark the permalink.